This printed article is located at http://yongmao.listedcompany.com/financials.html 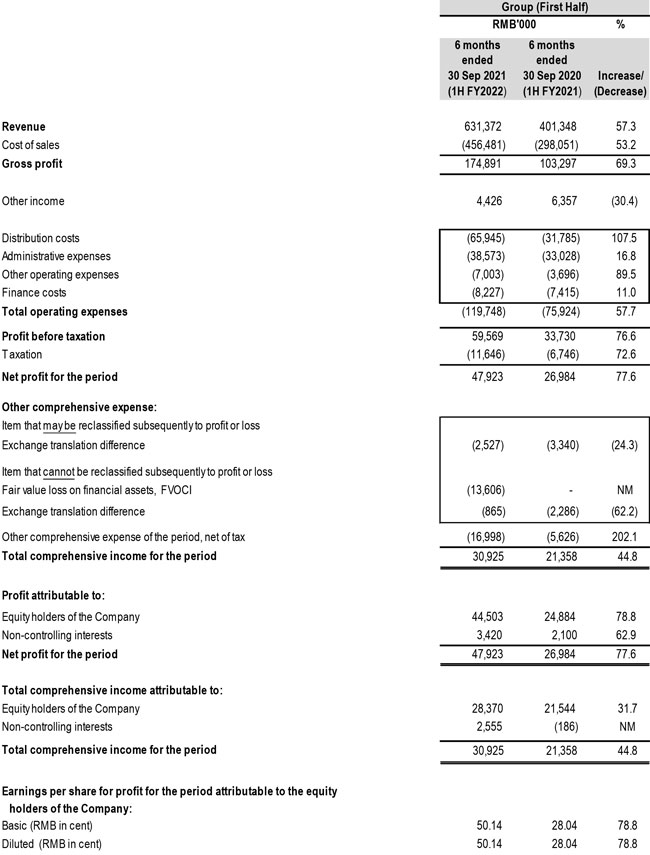 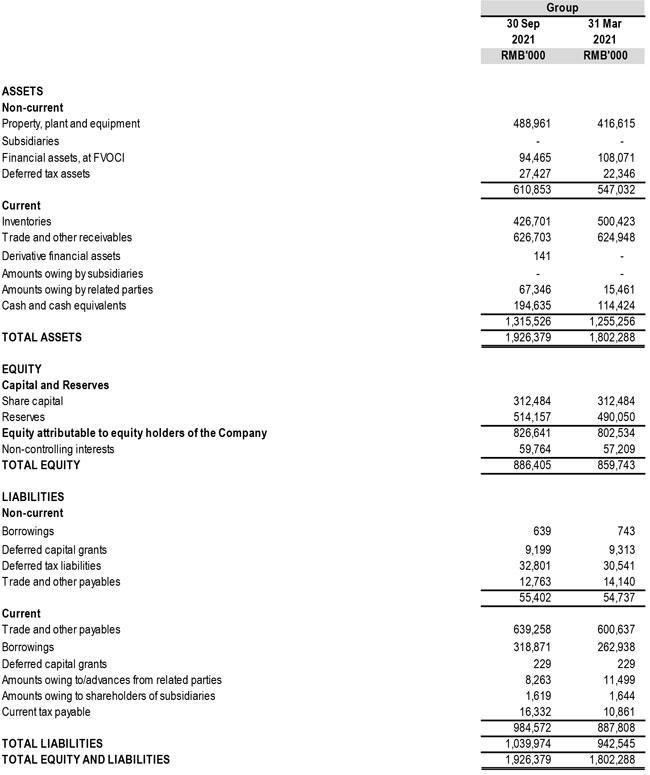 Review of Income Statement of the Group

As a result, revenue from sales of tower cranes and components increased by RMB198.6 million from RMB327.8 million in 1H FY2021 to RMB526.3 million in 1H FY2022. Rental and service income has also increased by RMB31.5 million during the period under review with more government projects for both infrastructure and residential in Hong Kong and increase in rental activities in the PRC.

Due to the recovery of economy in the PRC post lockdown, revenue in the PRC has increased by RMB97.8 million from RMB266.7 in 1H FY2021 to RMB364.5 million in 1H FY2022. Revenue in all other segment, including Asia (outside of the PRC), the Middle East and others and the USA & Europe also increased by RMB85.7 million, RMB35.9 million and RMB10.6 million respectively.

The higher gross profit margin in 1H FY2022 is due to product mixed as higher sales proportion for large and mega size tower cranes as well as the luffing series which generate higher sales margin were sold during the period under review. The lower gross profit in 1H FY2021 was also attributable to high production overhead cost absorbed during the first half of year 2020 with government containment measures implemented in the PRC amid the rapid spread of the COVID-19 pandemic. The increase is also due to higher rental income which generates higher margin.

Other income also includes rental income and ancillary charges of RMB1.6 million which pertains to sub-rental income from Hong Kong yard for 1H FY2022 and insurance compensation of RMB0.3 million.

Distribution costs increased 107.5% to RMB65.9 million in 1H FY2022 as compared to RMB31.8 million in 1H FY2021 mainly due to higher freight and transportation charges and employee benefits cost in line with higher sales. Other than higher sales, land transportation and sea freight had also increased significantly during the period under review due to supply shortage.

The exchange gain for 1H FY2022 arose mainly from:

HKD and SGD depreciated 1.5% and 2.6% respectively against RMB as at 30 September 2021 as compared to last financial year end.

Review of Financial Position of the Group

Non-current assets increased by RMB63.8 million to RMB610.9 million as at 30 September 2021 mainly due to higher property, plant and equipment and higher deferred tax assets, offset by lower financial asset, at FVOCI.

The increase of RMB72.3 million in the Group’s net carrying amount of property, plant and equipment was mainly attributable to the increase in rental fleet, partly offset by net depreciation charges and disposals. With the increase demand in Hong Kong rental market, a number of large and mega size tower cranes were added to the operations. Apart from this, two unit of our mega-size rental fleets were deployed to the Middle East and a unit to a windmill in the PRC.

Increase in property, plant and equipment was also due to the capitalisation of tower cranes sold with option to return by customer. During the period under review, certain sales of tower cranes were entered with an option to return by customers within a period of time-frame. In accordance to SFRS(I) 15, if the sale of the tower cranes is combined with a residual value commitment (buybacks), the criterion of transferring control is based on if the customer has a significant economic incentive to exercise the option to return the tower cranes. A significant economic incentive exists, or if the historical returns indicate that it is probable that the customer will return the tower cranes at the end of the commitment period. Thus, the control has not been transferred and the sales transaction is recognized as an operating lease transaction. The revenue and expense are recognized over the residual value commitment period in the income statement. Assets under operating leases, payment received as advances from customers are recognized in the balance sheet.

Deferred tax assets arose mainly from provisions and elimination of unrealised profits in intragroup sales and the various provisions made.

Financial assets, at FVOCI decreased with fair value loss of RMB13.6 million as at 30 September 2021.

Current assets increased by RMB60.3 million to RMB1,315.5 million as at 30 September 2021 mainly due to higher amount owing by related parties, higher cash and cash equivalents and higher trade and other receivables, partly offset by lower inventories (see Note on Review on Cash Flow Statement below).

Amount owing by related parties increased by RMB51.9 million to RMB67.3 million as at 30 September 2021 due to higher sales over repayments to related parties.

Trade and other receivables increased marginally by RMB1.8 million to RMB626.7 million as at 30 September 2021. The increase is due to higher trade receivables in line with higher sales in 1H FY2022, partly offset by lower advances to suppliers.

Inventories decreased by RMB32.7 million to RMB467.8 million as at 30 September 2021 as compared to RMB500.4 million as at 31 March 2021. This lower inventory mainly due to the fulfilment of more deliveries which was delayed in previous months due to the pandemic.

Current liabilities increased by RMB96.8 million to RMB984.6 million as at 30 September 2021 as compared to RMB887.8 million as at 31 March 2021 mainly due to higher trade and other payable, higher borrowings, and higher tax payable, partly offset by lower amount owing to related parties.

Amount owing to related parties decreased from RMB11.5 million in 31 March 2021 to RMB8.3 million in 30 September 2021 was due to higher repayment over transactions made during the period under review.

As at 30 September 2021, the Group’s total equity amounted to RMB886.4 million. The increase was mainly due to total comprehensive income of RMB30.9 million for 1H FY2022.

The Group reported a net increase in cash and cash equivalents amounting to RMB70.2 million in 1H FY2022 mainly due to:

China's GDP growth slows to 4.9 per cent in the third quarter of 2021 compared with a year earlier, missed expectations for a 5.2 per cent expansion. Fixed asset investment for the first three quarters of the year came in weaker than expected as a result of tight credit conditions.

The power shortage had a negative impact on overall production activities in China and it is reported that many factories had to stop production in late September as a surge in the price of coal and a shortage of electricity prompted local authorities to abruptly cut off power.

Amid several headwinds including power shortages, supply chain bottlenecks, a persistent property bubble and COVID-19 outbreaks, China’s economy could slow down further in the fourth quarter of 2021.

Outside China, Covid-19 epidemic is still spreading globally and the international landscape is complicated with high uncertainties and instabilities.

Meanwhile, in the Group’s major markets, i.e. Singapore and Hong Kong, have kept the COVID-19 pandemic largely under controls. Delivery of goods has gradually resumed in September 2020. With a sudden increased in cases in recent weeks, this may dampen recovery if more stringent lockdown measures are implemented.

Notwithstanding with the increase in revenue in 1H FY2022, the Group expects the operating environment in 2H FY2022 to be challenging for the reasons as mentioned above. The Group remains vigilant and committed in exercising cost discipline and will take necessary remedial actions, where possible.

The Company will provide further updates as and when there are any material developments.